Talking about giving is tough. You have to do it, and you should do it often, but it’s fraught with tension. And to make matters worse, we’re often trying to motivate our churches with the same recycled illustrations and verses.

It’s not that they’re necessarily bad (how can scripture be bad?!). It’s that they’re overdone, used carelessly, or just need to be retired for a while. 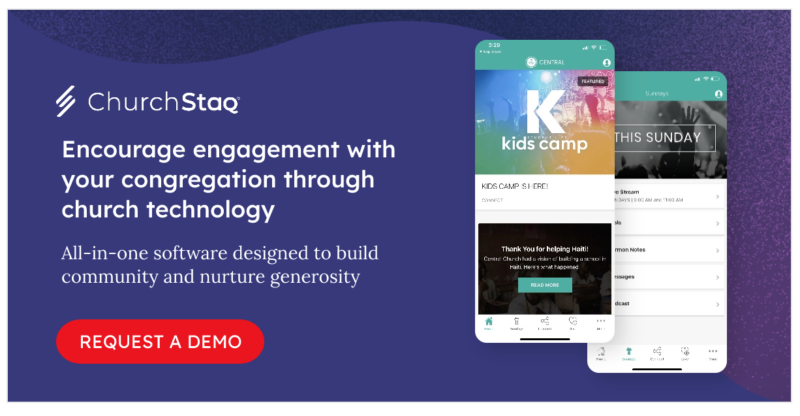 Here are 10 giving clichés your church is tired of hearing:

1. “Look at all the money you spend at Starbucks!”

This trope has become super popular. Sometimes it’s used by charities who want to let us know how much good we can be doing “for the price of a daily cup of coffee.” At other times, it’s used by churches who want us to feel guilty for spending money on coffee that we could be contributing to the church.

It’s a good thing to be mindful of, especially when it comes to unnecessary expenses like coffee, Netflix, or whatever. But we don’t want to make people feel like God is shaking his head in disappointment every time someone enjoys a latte.

God doesn’t view generosity and charity the same way we do. Often, He uses regular people like you and me to shows us how He really feels about giving. Check out real-life stories about generosity in action and learn more about God’s generous heart, all in the free ebook, Start With Generosity. Download for free today!

This one comes in a variety of styles. In his song “Asleep in the Light,” Keith Green sings, “Jesus rose from the grave, you can’t even get out of bed!” Yikes.

If you want to induce guilt, it makes sense to compare my selfishness to Christ’s sacrifice—but it also creates a sense of despair and hopelessness, too. That’s not how you motivate people.

“Will man rob God? Yet you are robbing me. But you say, ‘How have we robbed you?’ In your tithes and contributions. You are cursed with a curse, for you are robbing me, the whole nation of you.”
–Malachi 3:8–9

This passage provides great guilt-inducing ammunition for churches looking to increase giving, but it’s one I struggle with. The historical context of Malachi 3 has to do with the priests like Eliashib being lazy and self-indulgent in their responsibilities. It’s too bad that this passage isn’t heard within the context of church leadership’s responsibility to be good stewards.

Two verses that are often tied to this promise are:

“Bring the full tithe into the storehouse, that there may be food in my house. And thereby put me to the test, says the Lord of hosts, if I will not open the windows of heaven for you and pour down for you a blessing until there is no more need.”
–Malachi 3:10
“….give, and it will be given to you. Good measure, pressed down, shaken together, running over, will be put into your lap. For with the measure you use it will be measured back to you.”
–Luke 6:38

Context is everything, and using these verses as promises attached to gifts is dubious. Paul tells Timothy that those who want to live a godly life in Jesus Christ will be persecuted (2 Tim. 3:12). We’re setting ourselves up for cognitive dissonance if we’re also saying that it’s godly to give and those that do will always be rewarded with conventional goodies.

The thought of sending treasures forward into glory arises in the story of the guy who goes to heaven and Peter shows him the shack that he’ll be living in forever. When the man grumbles, Peter tells him that they did the best they could with the resources he sent ahead.

It’s honestly not a terrible illustration. It’s just that as soon as it starts I think, “Oh no, here we go.”

6. “Jesus did a miracle because of a boy’s generosity.”

The miracle of the loaves and fishes is often used to reinforce what God can do with our generosity. That’s great and definitely something that should be pointed out, but that isn’t the point of the story. In fact, while the miracle of feeding the multitude is mentioned in every gospel, only John tells the reader that it was a boy who gave up his lunch for the crowd.

The point of the story is the miracle and proof that Jesus is the bread of life.

Another overused illustration is about a guy who takes his son to McDonald’s and buys him a happy meal. When he goes to take one of the son’s fries the son slaps his hand. The gist of the story is that the man paid for the food so it’s technically his and the boy is robbing what rightfully belongs to his father by not being more generous.

Should the boy slap the father’s hand? Probably not. Would I do the same thing? Yep.

One of my old pastor’s favorite jokes was about two guys stranded on a desert island. One of them is anxious and worried and the other is completely calm and unruffled. The anxious one yells, “How can you look so trouble free right now?”

“I know we’re going to be rescued,” the other replies. “I tithe a lot and I know my pastor’s sending out a search team as we speak.”

It always struck me as a reinforcement from the pulpit, whether in jest or not, that the people with the most clout are the ones who give the most.

Does God love a cheerful giver? Absolutely. Does that mean God doesn’t love someone who gives reluctantly? Not necessarily. Sometimes in order to get to the place where you’re a cheerful giver, you have to give when you’re not so happy about it.

This one always bothered me because, as a pastor, I have actually been told, “I’ll give when I can be cheerful about it.”

One of my all-time favorite throwaway comments in a tithing sermon is always, “You can’t take it with you. Have you ever seen a hearse with a trailer?” It always seems like such a silly comment in light of Proverbs 13:22: “A good man leaves an inheritance to his children’s children….”

There is definitely room to talk about how we’re weighed down by our possessions, but the idea that you should die with absolutely nothing is not a biblical idea. We’re encouraging wise stewardship, not liquidation.

Giving Is an Important Topic

We need to be talking about giving as often as we can. The more resources we have, the more we are able to grow the Kingdom! But it’s an important enough topic that we need to spend time developing new and thoughtful discussions around the topic, not rehashing the same old pablum.

If you need some good resources on giving, check out:

Have some clichés you’re tired of? Share your thoughts in the comments!

The free ebook, Start With Generosity, has been an excellent resource for others hoping to learn more about how God approaches generosity. These real-life stories are written by and for people just like you—click here to download it today.

How to Inspire Recurring Tithes & Offerings After Christmas

Supporting and Celebrating Every Form of Holiday Generosity

How to Keep Track of Church Tithes

20 Bible Verses about Tithing and Offerings