Is generosity a risky venture? Can we afford to be generous? Is there enough to go around? Enough for everyone to have their fair share? Enough for all seven billion of us?

The human condition is haunted by a fear of scarcity—a pervasive mentality of shortage and insufficiency. We fear there will not be enough. Most are convinced that there can never really be enough. We grow up believing that reality is zero-based and that creation is a closed system. We are the sons and daughters of Cain. We have learned to view the world through Cain’s lens of insufficiency and frightened self-interest. We don’t perceive creation as blessed with abundance but cursed with scarcity. Famine, not feast. So we learn from Cain to see the other, not as brother, but as competitor and even enemy. We fight, pillage, plunder, stockpile, and horde because we believe we cannot afford to be generous and gracious. The paranoia of poverty lies at the heart of our systemic sins. We fear there won’t be enough land, oil, water, food, money, or labor to go around—so we construct and maintain sinful structures to guarantee “us” and “ours.” This is the form of civilization over which Cain—the biblical founder of the first city—is the architect.

Loaves and Fishes…and Some Left Over

It is into this fearful and violent world dominated by the paradigm of scarcity that the Son of God appears. And on a grassy hillside overlooking the Sea of Galilee Jesus gives us an enduring sign to show just how mistaken we are. We call it the miracle of the loaves and fishes. It’s one of a handful of miracles that all four Gospel writers record. It is a miracle story that is always inviting and ever fascinating. It’s a sign of liberation.

As he taught the multitudes about the kingdom (government) of God that was breaking into the world, and time and time again in scripture, Jesus asked his disciple Philip, “Where are we to buy bread for these to eat?” After a few quick calculations, Philip replied, “Six months’ wages would not be enough for each of them to get a little.” Notice how Philip speaks from a vocabulary of scarcity: “Six months’ wages (which we don’t have!)…not enough…to get a little.”

Then another disciple, Andrew, spoke up: “There is a boy here who has five barley loaves and two fish.” Perhaps feeling a bit embarrassed for suggesting that the modest lunch of a child could put a dint in the hunger of a crowd numbering in the thousands, Andrew then adds, “But what are they among so many people?” Jesus’ response was to direct the people to sit down. When John tells us there was much grass in that place we can’t help but be reminded of the 23rd Psalm:

The Lord is my Shepherd,
I shall not want.
He makes me lie down in green pastures.

Jesus took the fives loaves and two fish, looked up into the infinite heavens, blessed them, and began to give them to his disciples to distribute to the people…and he didn’t stop giving bread and fish to the people until all had eaten their full and twelve baskets of leftovers had been collected. The ancient Israelites asked, “Can God spread a table in the wilderness?” Jesus gave the definitive answer—yes!

Abundance: The Beauty of the Infinite

What a beautiful story! In a scenario of seeming scarcity, Jesus takes a little boy’s lunch, looks into God’s infinite heavens, blesses the offering, and satisfies the hungry masses with an abundant feast. This is, to borrow a phrase from David Bentley Hart, the beauty of the infinite. The feeding of the five thousand is not just a miracle of provision, it is a sign that we no longer live in a zero-based, closed system universe. With the Incarnation, the infinite has made contact with the finite. 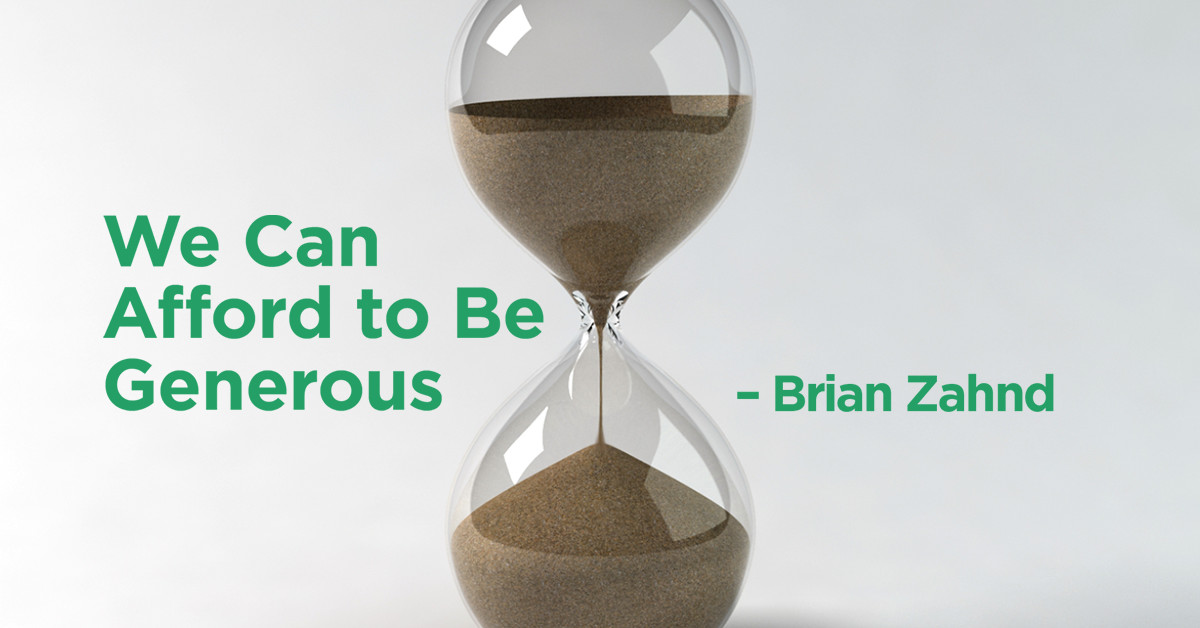 Imagine an hourglass. Two glass spheres, one above the other, connected at a single point through which grains of sand can pass from the upper sphere into the lower sphere. Now imagine an hourglass with an upper sphere that is infinite. This is a picture of the Incarnation. The Incarnation is the connecting point between God and humanity, between the Infinite and the finite. Jesus Christ is the single point within finite history through which the infinity of God is poured into creation. This is the mystery of Incarnation and the beauty of the infinite. To connect with Christ is to connect with the infinite. To believe in Jesus as a lifestyle is to connect our lives to the abundance of God and the beauty of the infinite.

Generosity Is a Form of Trust

This is why Jesus constantly tells us not to worry about scarcity, but to trust in God. We are not limited to a finite, zero-based, closed-system universe. We don’t have to be dominated by the paradigm of scarcity that leads to the fear-based reactions of greed, competition, and war. Jesus wants us to follow him, to learn to trust God so that we can live light and free, always willing to give, always extending a generous hand. Jesus is the one who teaches us that we can afford to be generous. Faith-based generosity accesses the infinity of God. Faith-based generosity is when a little boy’s offering leads to an abundant feast where no one goes hungry. The lesson of the miracle of the loaves and fishes is that we can afford to be generous.

We can afford to be generous because generosity is an act of faith that accesses the infinity of God.

We can afford to be generous because generosity is what Jesus blesses.

We can afford to be generous because we do not live in a zero-based, closed-system reality as we have feared.

We can afford to be generous because Christ has revealed the abundance of God and the beauty of the Infinite.

I welcome your thoughts, comments, and ideas on what you have just read. Please share below.

Brian Zahnd is the founder and lead pastor of Word of Life Church, a non-denominational church in St. Joseph, Missouri. He is also the author of several books, including A Farewell To Mars and Beauty Will Save the World.

Giving Strategies in a Post-Pandemic Age

Stewardship in the Bible: Verses About Glorifying God in 2021