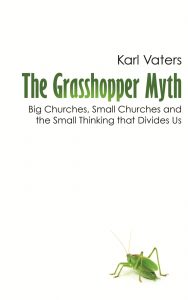 “I am a small church pastor. And I am not a failure.”

So opens The Grasshopper Myth, a daring little book by Karl Vaters, pastor of Cornerstone Christian Fellowship. As a child of the Church Growth Movement, Vaters spent years reading books, attending conferences, and applying innovative growth practices to his modest congregation. But like many others, Vaters reaped burnout rather than growth. 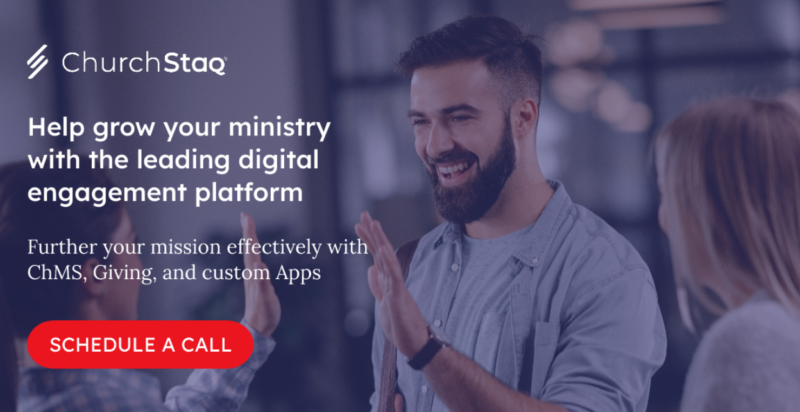 “I’m a small church pastor,” repeats Vaters. “As soon as I recognized it, I was okay with it. The more I became okay with it, the better I did it.”

Before I define the Grasshopper Myth, it’s important to understand the Church Growth Movement that proliferates it. Beginning in the late 70s, the Movement began when the top-down efficiency methods that won WWII (and rebuilt nations) were applied to the church.

While churches of large size existed prior to WWII (Charles Spurgeon’s sermons drew up to 23,000 people), the term megachurch doesn’t just refer to size. It connotes a church with a growth methodology modelled after business corporations.

The Church Growth Movement grounds itself biblically in Christ’s parting words to the Apostles before His Ascension: “Go therefore and make disciples of all nations, baptizing them in the name of the Father and of the Son and of the Holy Spirit, teaching them to observe all that I have commanded you” [Mat. 28:19-20, ESV]. This is the Great Commission, and members of the Movement take it seriously. It is their reasoning behind every new marketing strategy that manages to fill the seats on Sunday. “More people means more souls,” explains Vaters, “and more souls is what the kingdom of God is all about.”

Following this logic, the Church Growth Movement emphasizes two metrics: Butts in the seats and bucks in the offering plate. High rates of butts and bucks aren’t the objectives, per se, but they are the visible signs that the objectives are being met. So long as she excels in those metrics, the church is a success.

If that is so, then we can reasonably say some churches are more alive than others—by which we mean they have higher growth rates.

Getting trapped in boastful comparisons, and allowing them to divide and form us, is the Grasshopper Myth. Vaters defines it as “the false impression that our small church ministry is less than what God says it is because we compare ourselves with others.” The myth misdirects our gaze from God’s idea of a successful church to a set of numbers.

If you want a book that calls for the execution of the Church Growth Movement, this isn’t it. Though Vaters is a small church pastor (and happy to stay one) he does not object to megachurches or the marketplace-inspired machine that produces them. In fact, his mission is not to criticize the Movement but to introduce a new way to talk about growth, health, and “smallness.”

While Vaters was attending conferences and reading books, he slowly became aware of a mild contempt in the Church Growth Movement toward small churches. Really, this shouldn’t be surprising. If growth is the sign of health, then a church that has plateaued—even if it is stable and active—must be sick and in need of fixing. In one of Vaters’s many anecdotes, a fellow pastor asked a panel at a church growth conference if there is anything wrong, either biblically or otherwise, with being a small church.

“No,” replied the megachurch pastor. “Not for two weeks.”

Again, Vaters does not object to big churches. He objects to bigthink (my term, not his), which is the made-up idea that the church’s primary objective is to meet a metric.

A church suffering from bigthink can be an Appalachian Baptist congregation flexing an attendance of twenty or a megachurch in downtown LA with enough chairs to accommodate an international convention. It isn’t size that makes it a bigthink church—it’s an idea. Namely, the idea that a small church that stays small is more or less a failed big church.

What Vaters is trying to do with his book, and more recently with a series of posts on Christianity Today, is make room for small churches in a conversation that disregards them as “failures” and “laggers.”

So, what precisely is the place of small churches in the Church Growth Movement?

Vaters takes the Great Commission seriously, but he doesn’t interpret the passage to mean that we should be building bigger churches, but more churches—big and small. “More specifically, does God want my church to grow?” asks Vaters. “Or does God want the church to grow?” Oftentimes, bigthink pastors talk about their churches making a global impact beyond the confines of their communities. But this is not an assignment placed on a single congregation: It is a burden borne out by every church doing its part in its share of the world.

Far from being a failed big church, the small church is historically the norm for the Kingdom of God on earth. Even today, 93 percent of American churches are small (meaning, under 350 members) and 80 percent are very small (under 200). “If size equals success,” says Vaters, “then 93 percent of pastors are unsuccessful, bad at their jobs, and inadequate at fulfilling their calling…”

In short, American churches have become so infatuated with the prospect of growth that we tend to forget what is normal disciple-making.

Even in megachurches, the small church remains the standard model: It presents an ideal for intimacy, flexibility, engagement, and subsidiarity that larger churches strive to replicate through small groups and other ministry programs. It’s a bit ironic that while small churches are pushed to become big churches, big churches endeavor to be more like small churches.

Meanwhile, the majority of American Christians attend small churches. Half of them say they prefer to. With such a percentage among the body of believers, church leaders everywhere should seriously reflect on what model ministers to the spiritual needs of people. “Wanting to worship and serve God in a Small Church is not a theological error or a personality deficit,” says Vaters. “It’s time we stopped treating it as though it was.”

Vaters spends a good deal of his book emphasising the unique strengths of the small church, which I won’t go into here. I will clarify he isn’t suggesting that small churches are better churches. On the contrary, a small church can preach a watery gospel or neglect to serve its community just as much as a big church.

Failure to observe the Great Commission isn’t necessarily a matter of size.

Still, there are some things only a small church can do, and other things it does better than its bulkier sisters. To paraphrase Plato, “A great church is not to be confused with a populous one.”

So, is there room for small churches in the Kingdom of God envisioned by the Church Growth Movement? Vaters thinks so.

For Vaters, the question isn’t, “Are we growing?” but “Are we ministering toward our purpose as a church?” If your primary mission is to accelerate butts and bucks, then your church, according to Vaters, is too small in its thinking.

Rising attendance is such a prominent metric among bigthink churches because it implicates a corresponding rise in conversions, baptisms, donations, community service hours, etc. Bigthink churches don’t distinguish growth practices from ministry because they share such a strong correlation. After all, more people sitting in church means more people receiving the gospel, right?

As useful as metrics can be, they have a subtle way of misinforming. Counting heads is a good way to measure attendance, but that’s all it measures. When we prioritize headcount too highly, we create blind-spots in our assessment of church health. Other factors critical to successfully fulfilling the Great Commission are left out. “Not all successes have numbers to verify them,” says Vaters. As history shows, what often leads to the demise of bigthink churches is a sort of tunnel-vision.

When attendance is rising, we too easily imagine we’re doing things right; conversely, if attendance has plateaued, we think too soon that we’re doing something wrong. Vaters’s solution is to prioritize purpose first. “Not every church is called to [be a big church],” says Vaters. But every church is called “to feed the flock—just like Jesus told Peter to do. That is success. And it is truly immeasurable—in both senses of that word.”

Vaters makes several robust criticisms of metrics-obsessed bigthink. He has also made headway in carving out space for small churches in the Church Growth Movement.

For critics of the Movement, Vaters’s book may have little to offer. His position is that the church can (and should) continue to model itself after the popular culture (in order to shape the culture) and borrow marketing techniques from businesses. In fact, at one point, he compares small churches to family-owned businesses and big churches to enormous corporate chains: The two might “sell” the same thing (i.e., the gospel), but they offer wildly different consumer experiences. As Vaters points out, there is a demand in half the population for the small church experience. In the end, then, Vaters’s advocacy for the small church model amounts to an apologetic for its effectiveness at getting people to church by acting on their “consumer preferences.”

I think his book should be read by the pastors of small churches and megachurches alike. He has something to tell them all. However, he is weak in a few areas.

First, it is easy to attack metrics. Most megachurch leaders are aware that no metric tells a full story. However, their use is so prevalent because megachurches have few other viable means for assessing church health, while small churches can diagnose their congregations, as it were, at a glance. Vaters neglects to offer a helpful alternative to metrics that big churches can use.

Second, Vaters needs to be cautious that the contempt he has felt from the Movement toward small churches doesn’t swing in the other direction. We would only swap problems and resolve none if megachurches felt the contempt of small churches. I don’t think that is Vaters’s goal, but an additional admonition from him to exercise caution is merited.

Perhaps it belongs in another book, but I would like to hear Vaters’s thoughts on the aspects of the Church Growth Movement that have benefited small churches, notably in the area of technology. Megachurches are responsible for inspiring massive technological innovations in the last few decades, but not all of these innovations are good for just megachurches.

Technology (web, social, mobile, etc.) has a way of levelling the playing field. We’ve seen it for small business, but we’re also seeing it now in the church. Of course, we at Pushpay work with churches of all sizes, and through our interactions with our customers, we know God uses churches big and small to disciple the nations. We see it in action every single day.

So, as we move forward, let’s remember to be gracious to one another, recognizing that we don’t all have to conform to a single church model in order to succeed in God’s work. We are working together on an incredible mission as we disciple the nations for Christ.

Blake Adams is an editor for the Pushpay blog and former educator. His work has appeared in several publications, including Salvo Magazine, WORLD Magazine, and Mere Orthodoxy. He lives with his wife in Seattle, WA. You can follow him on his blog, Tarrypin.

5 Tips for Attracting Millennials to Church